As Robert Burns said, "the best laid plans of mice and men...." We spent 2 days in Cape May's torrential rain hoping for a break in the weather so we could cycle the area. Long ago we rode our bikes here and it was such fun that we were hoping to have a re-run...but not! Decided we'd stop again on our way south so departed marina this morning with the intentions of spending tonight in Atlantic City. NOAA said seas were 1 foot or less. NOAA just doesn't knowa and it's not the first time we believed their "fake forecast". We went out into the Atlantic and after an hour of feeling we were in a washing machine, we turned back. We got in high seas once before because we relied on NOAA.

Here 'tis Tues and neither the ocean nor Delaware Bay looks 'friendly' for another week...so here we sit. By next week it'll be too late to resume our travels to Long Island Sound so in a week, we'll retrace our steps heading south.Of course, this messes with Bill's meticulous spread sheet (which troubles him) but it's always cast in dilute Jello is is changed several times a day. He just commented that his spreadsheet looks "soft". We'll stay here till Monday when Delaware Bay should be user-friendly and then we'll head south. We planned on meeting trawler friends in LI but not this time and that's really disappointing.

2 August
This boat, in the slip next to us, sank last night and owners are trying to raise her!!!??? Meanwhile, jugs of fuel, anti-freeze, all manner of carnage from inside floated out and away. We’re amazed that the EPA nor any environmental agency has even been down. This is damaging our oceans and environment and I’m more than a little bit upset!! 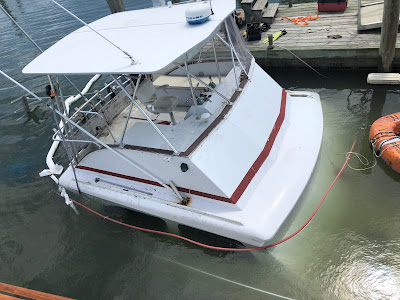 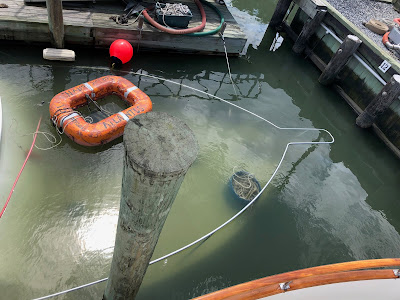 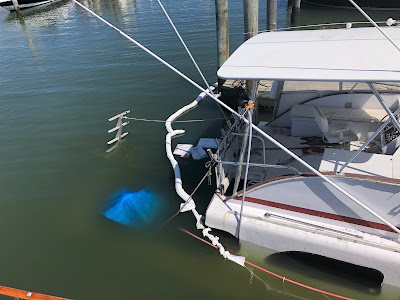 An update to last night's saga. Despite the mammoth brand-new bright and shiny crane and the other trucks with crew, BIG counter-balance weights, and working after hours---the cost was only $5,500!!! 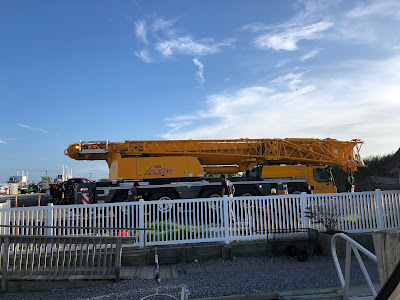 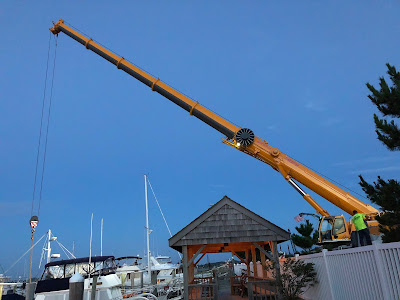 We thought it would be much much more. The boat owner told us that this morning. He's young and a trooper. He's been working on that tub all day by himself. No wonder he's thin and toned and fit.... 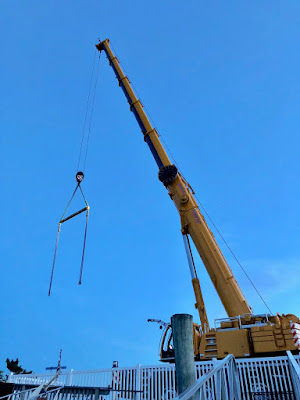 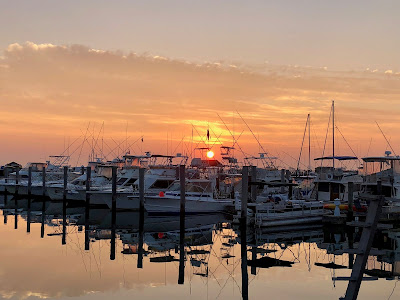 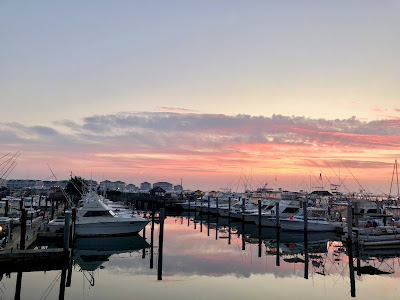 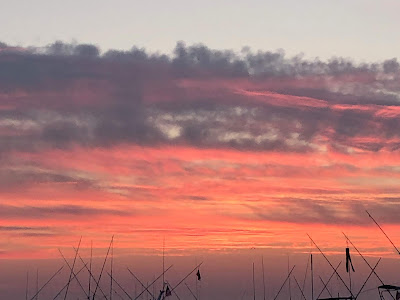 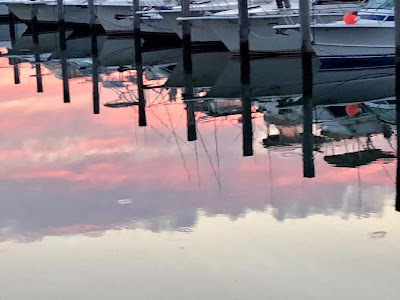 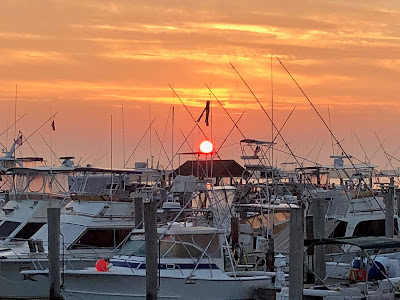 We had a delightfully peaceful cruise across Delaware Bay landing in Chesapeake City, VA, for a night or two for calm nights at anchor. 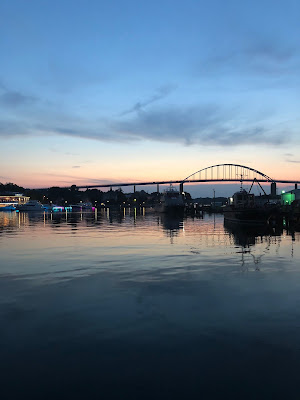 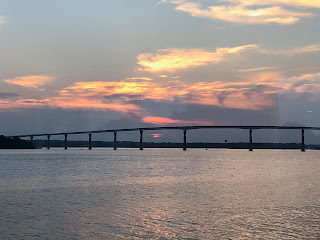 8 August
Pretty little historic houses on our walk to breakfast this morning. 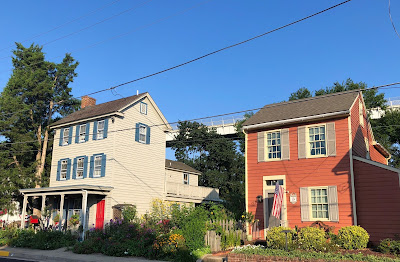 Our cruise today took us to Severna Park and to our Marathon, FL, sailing friends' dock. We met Tom and Elinor years ago when we were next slip neighbors. Tom's an avid cyclist and we rode with him in the Keys as well as on the B and A Trail while visiting them in MD. They're always wonderful hosts and enjoyable company. 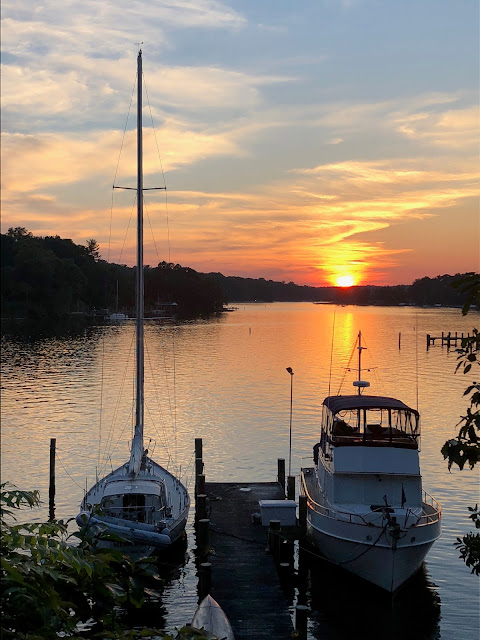 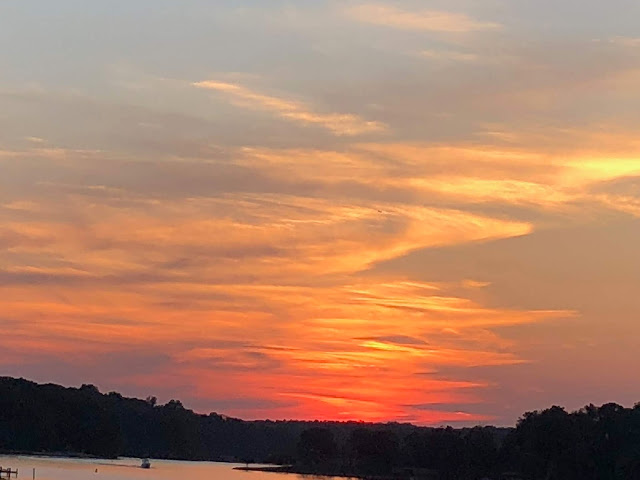 Sunset on the Severn from Tom and Elinor's deck

This morning we had a 6:30 AM ride with Tom and enjoyed a coffee at The Big Bean situated along the trail. 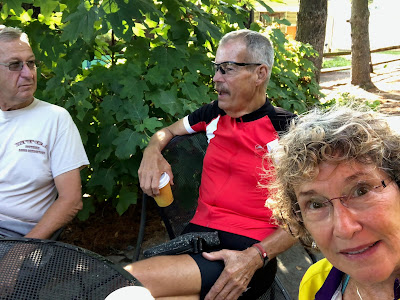 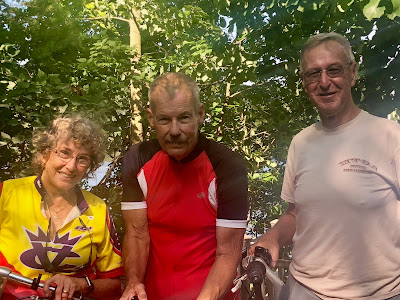 While at Tom and Elinor's, Mike, a friend with whom I used to work, was in the area to celebrate his mom's 92nd birthday. He came over for a boat visit. T'was fun catching up on our lives in the decade plus since we were both gainfully employed. 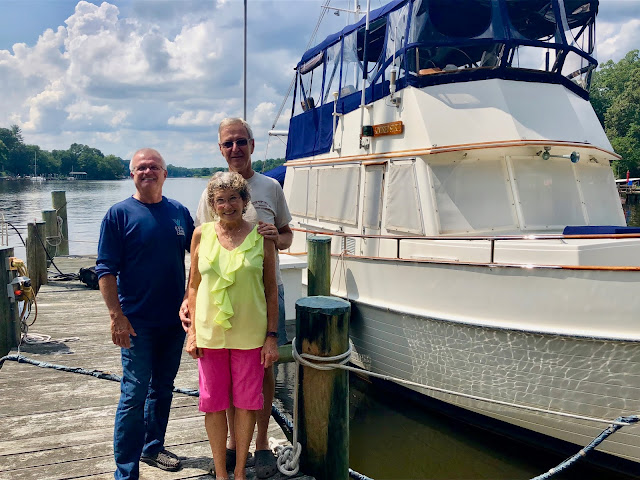 Our last full day in Severna and a wonderful one. I went with Tom on the best ride I’ve ever done since we’ve been riding our Bike Fridays 13 years ago. I felt wonderful, it was fun, and there was NO whining. The route was a new one—on the B&A Trail and through some historic neighborhoods. I came home on an endorphin high.

Since the ocean was unfriendly to us couple weeks ago causing us to abort our trip to LI, we were left with loose ends for a few weeks. We connected with the Chesapeake Bay Cruisers for a 2 week cruise of 8-10 boats and we're havng a ball! The organizers have done an incredible job of lining up marinas and restaurants. We knew just a few couples since we're rarely in this area but have met new friends and are having the time of our lives. Definitely the best group cruise we've ever taken. We departed Solomons today and are cruising the bay.

Our first 2 nights are in Herrington Harbor Marina and Resort and what a spectacular place with approximately 700 slips.

Cocktails this evening on the cusp of Herring Bay while docked at Herrington Harbor South. Foremost, (for me!) is a great pool with designated lap lanes. I was using fins and kick board and “they” deemed my kick board, a ‘flotation device’ which is outlawed! Was expecting them to call my fins a ‘pool toy’. Whatever! Just for a day and more than happy to have a pool with lane lines. No T but flip turns weren’t a prob. Joined a group at 7:30 for a walk. Was so accustomed to Tom’s 6:30 launch that we felt like we were sleeping in. Fun place and a fun buncha boat people.

I love the picture of the reflection of the clouds at Utches Marina. It's a bit disorienting at first. 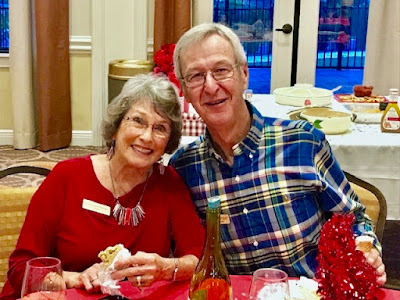